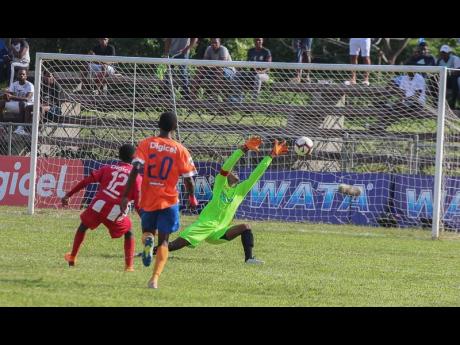 Lennon High will go into their return leg fixture against BB Coke High with a 2-1 advantage, this after both teams got their ISSA/WATA DaCosta Cup second-round campaign off and running at the Juici Patties Park in Clarendon yesterday.

Lennon, who are seeded 21, had to dig deep in a hard-fought contest to secure the crucial win, but the St Elizabeth-based BB Coke will be buoyed that they scored a crucial away goal heading into Saturday's return fixture.

It was a contest that began with both teams failing to capitalise on their opportunities, but it was BB Coke who will be kicking themselves, after they squandered seven chances to put away the tie.

The teams had to wait until the second half to get the opening goal, and it came via the boot of BB Coke striker Jason Dyer, who latched on to a right-sided free kick in the 47th minute.

That lead did not last very long, as Lennon hit back two minutes after, as a mix-up in defence saw a BB Coke defender putting the ball past his keeper Shavar Foster in minute 49.

Lennon would continue to press for the go-ahead goal, and they would get it in the 71st minute as midfielder Kyla Williams rocketed a left-footed shot, which slid under goalkeeper Javaun Grant to make it 2-1.

The Clarendon-based side would hold on for the win which pleased coach Byjeon Thomas.

"Today, it was all heart from my players," he said. "We fought and grind even when we went behind, but we still have work to do heading into the second leg."

Losing coach Kemar Ricketts said his team only had themselves to blame.

"I am disappointed to have lost this game today," he said. "We had numerous chances to score in the first half and even in the second half, but I will do my homework and come back for the return match.

In the first game of the doubleheader, Port Antonio High and Denbigh High played to a goalless draw.