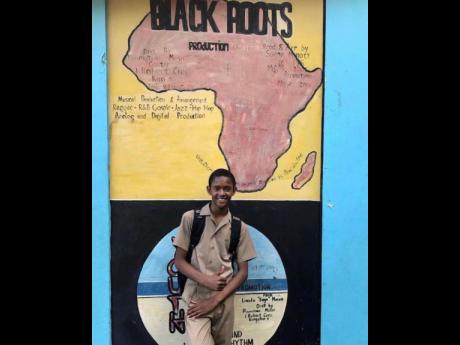 David Minott was a student of the Wolmer's Boys' School in Kingston.

David Minott, the 16-year-old grandson of dancehall veteran, the late Lincoln 'Sugar' Minott, lost his life while visiting the Somerset Falls attraction in Portland on Sunday.

The Wolmer's Boys' School student was with his grandmother and a church group on a visit to the falls when he reportedly drowned.

His grandmother, Sharon Miller, told THE STAR that her son, who is named Lincoln Minott Jr, is David's father. She described David as "a special, brilliant and exceptional boy" who was well loved at home and by the school community.

"David is the first grandson for Sugar Minott and he loved the ground that David walked on. Sugar was the only son for his father and he always wanted to ensure that the Minott line would live on. So, he was very happy when David was born. He went to [Victoria Jubilee Hospital] himself and bring home David," a distraught Miller shared.

Sugar Minott, a singer, producer and sound system owner, who is heavily credited with helping to popularise reggae music, died on July 10, 2010 at age 54. He was born on May 25.

Miller explained that on Sunday she did her own surveillance of the falls before giving her grandson permission to join the group.

"I went with David myself to protect him because anything to do with water me not sending David by himself. They gave us life jackets and I went and looked at the falls and made sure that everything was all right and then told David that he could go. I was on the other side waiting for him, and half hour later dem tell me seh mi grandson dead. David is not a swimmer and him not going into any water by himself. I can't live without David," Miller wailed.

Writing on Instagram, David's aunt, singer Pashon Minott said: "To my dearest nephew David, my heart is in pieces. I'm so lost for words and don't know what to say. I hope you knew how much I love and adore you. You'll always be in my heart my sweet , loving, talented boy. = R.I.P #DavidMinott #MyDearNephew. I can't say goodbye."

Reports are that shortly on Sunday afternoon, Minott, who had just completed a boat ride, disembarked the vessel and sat on a rock. When he was not seen by the group, a search was conducted and he was discovered at the bottom of a stream. He was rushed to the Port Antonio Hospital where he was pronounced dead.