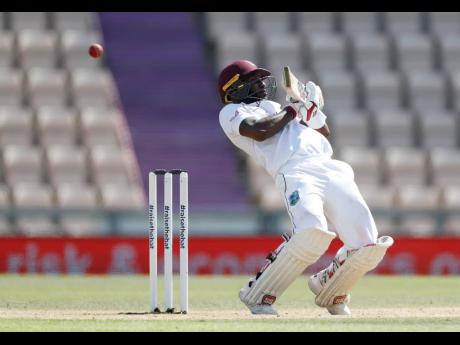 Blackwood evades a rising delivery from England’s paceman Jofra Archer during the final day of the first cricket Test match. 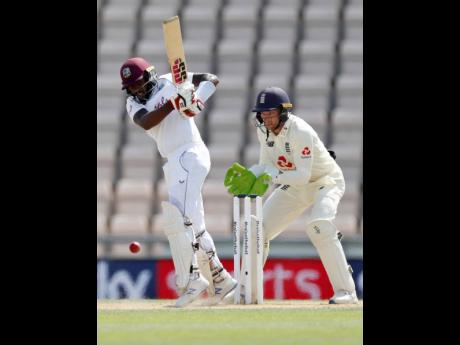 Jermaine Blackwood (left) plays a shot during the fifth day of the first cricket Test match between England and West Indies at the Ageas Bowl in Southampton, England, Sunday, July 12, 2020.
1
2

Jamaican batsman Jermaine Blackwood said at no point did he thought of getting to three figures, as his score of 95 helped the West Indies beat England by four wickets on the final day of the first Test in Southampton.

The right-hander came to the crease with the West Indies struggling at 27 for three chasing a victory target of 200 runs, this after the visitors had dismissed the hosts for 313 in their second innings, with Man of the Match Shannon Gabriel bagging 5 for 75.

The diminutive Blackwood faced 154 balls and batted for 228 minutes, which included 12 fours in his workmanlike knock. He shared in two crucial partnerships, first adding 73 runs for the fourth wicket with Roston Chase, who made 37, and then putting on 68 runs with Shane Dowrich, who got 20 before he became the sixth wicket to fall to captain Ben Stokes with the visitors needing 11 runs to win.

For Blackwood, his innings have so far proved to his doubters that he can mix his aggression with patience, and that personal milestones are secondary if the team is not successful.

"I wasn't thinking about the hundred at no point in time, I was just looking to get the score and get the team over the line," said Blackwood.

Opener John Campbell, who retired hurt and came back to hit the winning runs, finished unbeaten on eight while captain Jason Holder, who was left not out on 14, says he is not surprised about Blackwood's comeback knock in the second innings.

"I wish I had 12 Jermaine Blackwoods. These are the types of guys that you want to step on the cricket field with. He is a team guy through thick and thin, and I know when he crosses over that line he is going to give you his all. Sometimes he feels he can carry everyone on his shoulders, and I will do it with him. He is that confident a player," said Holder.

Already Blackwood is looking forward to the second Test which begins on Thursday in Old Trafford, and he is confident that he will get more runs once he applies himself.

"Once I can go out there and bat time and bat over 200 balls, I think I will score runs. Once I can continue to be my natural self and just mix it with a bit of patience, I think that will certainly boost me for the next game and right through my career."