Early results a plus – Powell 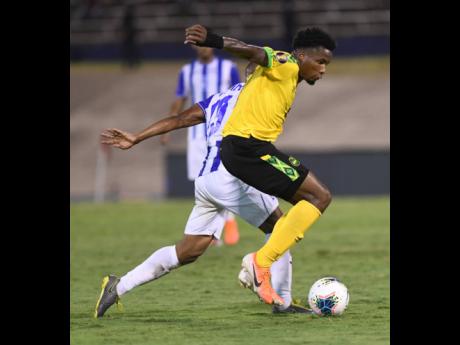 Jamaica international defender Alvas Powell says that if the Reggae Boyz can get some positive results early in their FIFA World Cup qualifying campaign, it will give the team the momentum it needs to go all the way to Qatar in 2022.

Jamaica, who are ranked 48th in the world, and fourth in the region, have to maintain their top-six status in Concacaf up to at least June of this year to qualify for the final round of qualifying, and Powell says the team has what he describes as a "big chance" to take one of the 32 spots.

"There is a big opportunity ahead," Powell told STAR Sports. "We just got to stay focused and work twice as hard. Once we put in the work that is needed, I am confident we will make it.

"If the results are coming, I am sure the rest will come. More sponsors will come on board, more supporters will come out to support us, so it will be important to keep the results coming in everything. If we can do that, everything else will fall into place," he said.

Powell, who moved from Cincinnati FC in the off season to new franchise Inter Miami, will look to put a disappointing season behind him, where his team finished last in the Eastern Conference last season.

"It wasn't a good season, but I came out injury free," he said. "But I am now looking at the next challenge with my new club, and I hope to help them to go forward."

Powell participated in the President's veteran football fundraiser for former national players at the York Oval in St Thomas on New Year's Day. He was pleased to be playing in the parish for the first time since his DaCosta Cup days with Paul Bogle High.