Beckford challenges Burke to a race for golden boot 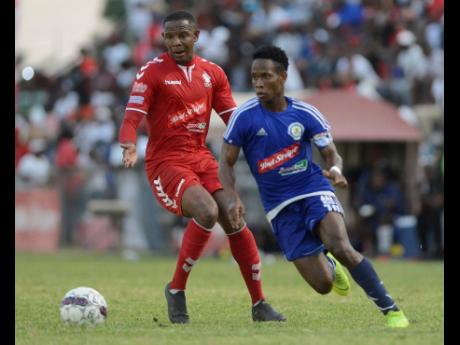 Mount Pleasant’s Kemar Beckford (left) sprints towards a loose ball while being closed down by UWI defender Ryan Miller during the first leg of their quarter-final match-up at the Anthony Spaulding Sports Complex on March 24, 2019.

Beckford has netted six goals in nine matches for the St Ann-based side in the second round, taking his tally to eight. But the diminutive player will also have to outscore Waterhouse’s Colorado Murray’s nine and leading goal scorer Dean Andre Thomas of Dunbeholden, who is on 12 to, to win the award.

Beckford is looking to add to his tally when Mount Pleasant go up against UWI FC in the live televised Monday night game at Anthony Spaulding Sport Complex this evening at 8.00pm.

“There has lots of improvement (in game). When the first round started I wasn’t finishing, I missed a lot of goals. So coming into the second round I tried to find out what I was doing wrong and try to set things right. So I really put in the work and trained hard and when the coach finish his sessions, I put in a lot of work on finishing and I believe that is why I am performing like this in the second round,” he said.

“Kemar Beckford is also in a goal scoring race with Corey Burke. He (Burke) is a friend of mine. We talk a lot and we try to push each other and I said I wanted the top scorer (award) and he said he wanted it as well. But now Corey Burke is leading me, so I have to catch him, I have to perform tomorrow (against UWI). But if I don’t score, as long as my team gets the three points it’s OK. But I see myself scoring in that game,” he said.

In the 2017/2018 season, Beckford top-scored for Waterhouse with 12 goals in their run to the final. Last season he admitted he was not at his best as he was plagued by injury most of the campaign.

However, after eight goals and nine assists this season, he believes he has rediscovered his best form and thinks he can at least do the same for Mount Pleasant and lead them to final this season.

“Coming to Mount Pleasant last season I had a slight injury, so I didn’t get a lot of starts. But this season I am OK. I have no injury, so you are seeing the Kemar Beckford that was at Waterhouse scoring a lot of goals.

“I will try to do my best here because my team depend on me because they know what I can do. But I want Jamaica look for a different Mount Pleasant than the team that came up last season. We were a new club, although not new players. But the team has gelled better now and they (public) will see much better performances from us. So we are looking to go to the final and lift the cup and show Jamaica what Mount Pleasant can do,” he said.