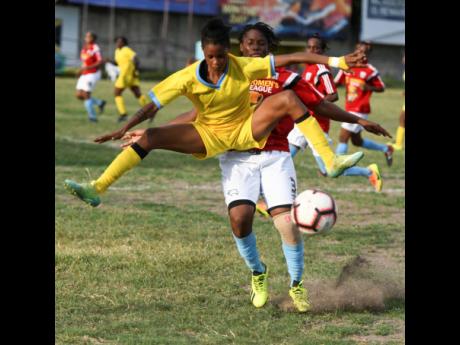 Waterhouse FC dedicated their 2019 JFF Women's Premier League (WPL) title to former captain, Tarania Clarke, after Davia Richard scored all three goals in the defending champion win over Cavalier in the final at the Spanish Town Prison Oval on Saturday.

Richards netted twice in the first half and added the third in the second period as Waterhouse added the league title to the mid-season crown. But Gilbert said despite their poor preparation because a lack of resources this season, the players were highly motivated to honour their deceased captain with the title.

"This one is really special, I thought the players really came out really positive, despite us having very little resources and preparation in terms of training time. But they were determined to come out on top, and they really did it in honour of their late captain Tarania Clarke. This is dedicated to her," he stated.

"She was definitely our motivation. The players wore undershirt with her picture on it and that just goes to show, as this is something that we didn't ask them to do, they did on their own. And it was really a touching moment, knowing she would have been there at the end celebrating and getting the unit together, so to win it in her honour was very special for us."

The Excelsior High School Women's coach was also full of praise for 15 year old Richards, who bagged a hat-trick to lead the team to back-to-back titles. "Davia Richards scoring three goals in the final was tremendous. She is the second leading scorer for us (behind Shantel Bailey on 29) with 21 goals. She was second to Christina Salmon in the high school competition where she scored over 40 goals. It has been a tremendous year for her and she really turned up big on Saturday," he commented.

He added that it was a very tough season off the field and that only their ability and experience made the difference. "It wasn't a good season, thankful we had some quality players, individuals stepped up to make this victory a reality. But in terms of preparation, there wasn't much training or training on a regular basis, so we had to rely on talent and experience from the ladies," he said.