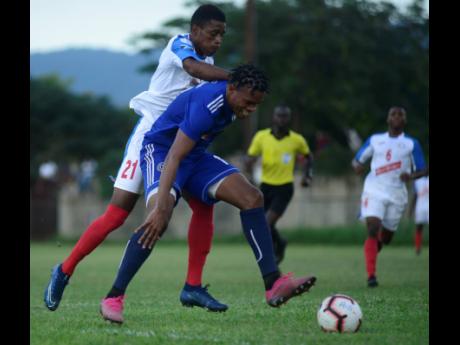 The former Rivoli frontman scored twice in the first half for the Ricardo Gardner-coached team, who were scoring their second win from as many games in the second round.

However, the striker who went a five-game run without scoring, said he will continue to find the back of the net as long he gets good service.

"It's been a while but it's been coming and I give thanks for those two goals. And the team really worked hard today to get three points," he said.

"But I always tell my teammates, once I get the delivery goals will come. But without deliveries, I can't score.

"But once you get good pass, you will get good chance and once you get chance you are liable to score goals. But to get these two goals at home, I can't be happier," he said.

Portmore was the brighter team in the first half and 16 minutes into the contest Burke fired his team in front.

The Philadelphia Union loanee then added his second of the match and fifth of the season in the 38th minute to give the host a two nil lead at the break.

Portmore also started the second half the better side and looked like adding to their advantage.

But Mount Pleasant fought their way back in the game and had some very good chances to get back.

The first opportunity fell to Kesslon Hall midway the half but his lobb over goalkeeper Kemar Foster was cleared off the line by Osani Ricketts.

Kemar Beckford also had a great chance late in the half but he failed to connect with a great cross from six yards.

Hall had the best chance but he put Beckford's cross wide of the upright from four yards.

The striker's afternoon was summed up moments from the end when he broke and fired over the bar with just Foster to beat.

"If we lose this afternoon, at least there should have been more effort," he said.

Portmore move from seventh to sixth in the table with 18 points, the same as Humble Lion.