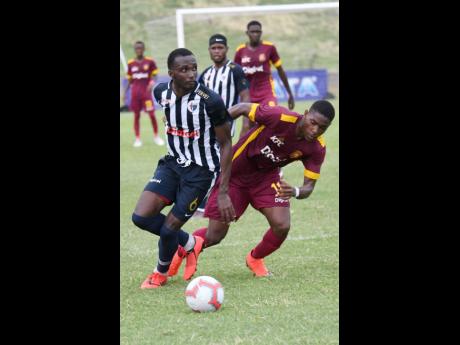 Jamaica College (JC) took another step towards securing Group E honours in the ISSA/Digicel Manning Cup competition after they played out a 2-2 draw with Wolmer's Boys School in the final six minutes of their rescheduled match at the Stadium East field yesterday.

The match is a continuation of one that was called off after 84 minutes on September 16 at the same venue when lightning struck five players, three from JC and two from Wolmer's, who were leading 2-1 at the time.

JC came out yesterday firing on all cylinders and they got the equaliser when Tajay Grant arrived at the near post to tap in a cross from close range in the 88th minute.

The draw has moved JC to 29 points, still two ahead of Wolmer's who moved from 26 to 27, with one round matches remaining in the group. They are followed by Vauxhall on 19, Tarrant on 10, Greater Portmore on eight, Jose Marti on five, and Innswood on three.

JC, who won five straight Manning Cup titles from 2013 to 2017, are now highly favoured to win the group as they are set to face Jose Marti in a rescheduled match tomorrow.

That match was called off with JC leading 2-0 after 41 minutes. Wolmer's face Vauxhall in their final group match.

JC head coach Davion Ferguson said he is delighted with the point.

"Based on the circumstances surrounding the game, we are really happy that we were able to recover the match to 2-2," he said. "It is two points dropped, but we are positive going forward into the next game that we can secure all three points against Jose Marti."