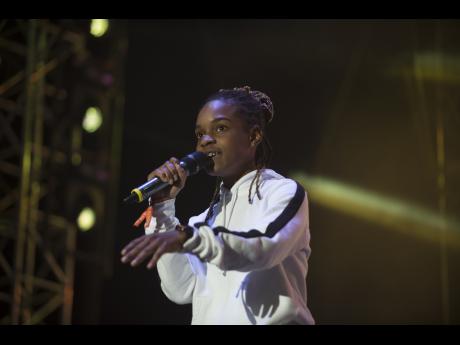 Since her song Toast broke on to the music scene late last year, young reggae sensation Mikayla 'Koffee' Simpson has taken the world by storm.

Earlier this year the 19-year-old was invited to be the opening act for R & B singer Daniel Caesar, and just last week it was announced that she would open for rock sensation Harry Styles on his Mexico tour come 2020.

The year may be ending with even more good news for her as her debut EP Rapture is being touted to make the final cut in the reggae Grammy nominations, to be announced on Wednesday.

“I would love to see Koffee who I think is the breakthrough artiste of the year. Her single (Toast) was absolutely astronomical in terms of its reach throughout the world and I thinks he would be well deserving of a nomination and I pray that she gets it,” said artiste manager Shelly-Ann Curran, who led Devin Di Dakta to becoming the youngest Grammy nominee back in 2016.

She said that although Koffee doesn’t need a Grammy nomination to validate her worth, it would be good to see all the work she’s put in over the past 12 months be awarded in such a huge way.

“She’s done many wonderful things for the genre over the last year and there are a lot of people who are looking forward to seeing her name on that list,” she said.

With Etana breaking a 21-year drought for female reggae artistes being nominated in the category last year, music critics believe that as far as female talent is concerned, a nomination for Koffee would signal huge growth and development in the genre.

Breadback, Sizzla’s producer, who is seeking a place among the final five himself, said a nomination for Koffee would show that the females are finally getting the recognition they deserve.

“She just come inna di music and she still have a far way to go but with her first shot, if she get it, it would a be very encouraging for other artistes, not just females. And even if she nuh get it, it would be a good try same way because a her first EP dat. It’s a good look,” he said.

Billboard charting producer NotNice says that with the Grammys garnering a reputation for nominating and awarding the same set of artistes, a nomination for Koffee would be great motivation for young artistes looking on.

“(It would tell them) Dem nuh affi inna di business long time and put out 10 album or dem nuh affi name Marley. It would a give nuff hope to new artistes,” he said.