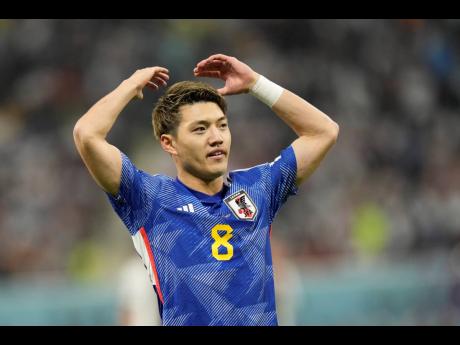 The Japan midfielder, who plays for German club Freiburg, had to grit his teeth when he heard people saying his team would be an easy opponent for Germany at the World Cup.

"I listened to their talks with a fake smile on my face and in my heart," the 24-year-old Doan said Thursday after sparking a remarkable comeback and arguably the biggest result in Japan's World Cup history the night before.

After entering in the 71st minute, Doan only needed four minutes to cancel Ilkay Gundogan's first-half penalty with the equaliser, then he watched as fellow substitute Takuma Asano bagged the winner in the 83rd for Japan's 2-1 win.

"I thought it was the coolest thing I could do as a man to shut them up by winning, so I'm glad I won and so could do that," Doan said.

The surprise win over the four-time champions set off wild celebrations from the sizeable contingent of Japanese fans at the Khalifa International Stadium and prompted outpourings of joy from fans watching the goals on large screens at home.

"I think that the whole of Japan was very excited," Japanese Prime Minister Fumio Kishida said. "I was able to watch the game on TV and it was a great victory."

Kishida paid tribute to the "team power, individual power and the direction of the coach".

Japan forward Daizen Maeda said it was "the happiest moment I have ever had in my football career".

While Japan celebrated what coach Hajime Moriyasu called "a historic moment, a historic victory" immediately after the game, the former midfielder struck a more cautious note the next day as he attempted to refocus them for the next match against Costa Rica on Sunday.

"I keep saying that we should not be too happy or sad about the results," the coach said Thursday. "The result against Germany is already in the past, so we will do our best to prepare ourselves to win the next match. We will do what we have always been doing and be ready for the next game."

Costa Rica's campaign at the World Cup started with a 7-0 thrashing from Spain.

Japan can theoretically even book their place in the second round with a win on Sunday, depending on a favour from Spain against Germany.

Japan are playing in their seventh straight World Cup and Moriyasu previously said they aim to reach the quarterfinals for the first time.

Even Doan has toned down his excitement as he looks forward to the challenges ahead.

"We haven't changed history yet, but I think it was a historic match, so I celebrated with all my teammates yesterday," Doan said. "But from today, I really changed my mind and am preparing for the Costa Rica game, so I will be careful not to be big-headed."