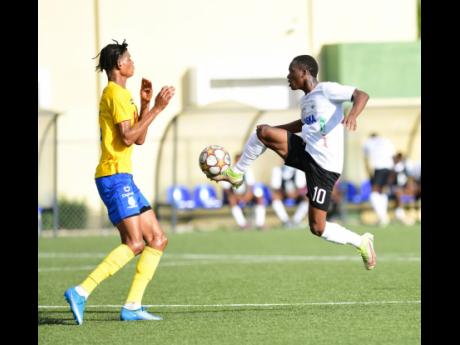 Cavalier forward Dwayne 'Busy' Atkinson, set on being one of the top strikers in the Jamaica Premier League (JPL) this season, intends to do the right things to get his game to an optimum level.

"I have started the season well. I now have three goals and one assist," he told STAR Sports. "I would love to build on it, so I am just keeping the focus, working hard and not getting distracted. "I also want to eat right, train properly, get good rest, and come out on the weekend and do my job."

In his first season in 2021, Atkinson scored three goals to help Cavalier claim the JPL title for the first time in over 30 years. The three goals placed him near the bottom of the goalscorers' chart.

Last year, he netted eight goals in 22 matches to help Cavalier finish third while being the ninth-best goalscorer in the league.

This season, however, he is working on being better as he aims to be included in the top-five marksmen in the league.

"I am aiming to finish among the top-five goal scorers and my intention is, just keep working hard and let the work speak for itself," Atkinson said.

"We never got what we wanted last season. We wanted to bring back the trophy, but we finished third. So we have to look back at it and regroup and we are coming again, but the Premier League is challenging because there are no different types of age groups.

"You have veteran players and you have very young guys. It is a different level of football from Manning Cup, so I am grateful for my first (JPL) Man-of-the-Match award," said the 20-year-old who scored twice in Cavalier's 2-1 win over Dunbeholden last weekend.