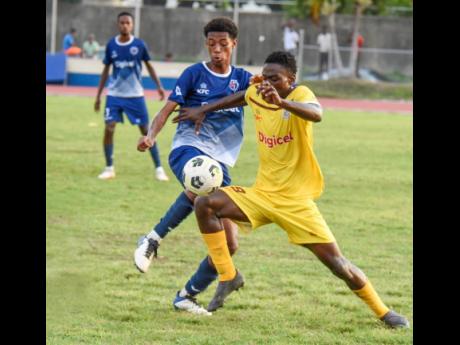 Charlie Smith High’s Damar Brown (right) and Xavier Davison of Jamaica College in a tussle for possession during a Group A Manning Cup match on November 20, 2021.

Damar Brown's brace was enough to lift Charlie Smith High to a 2-1 win over St George's College in Group A of the ISSA Manning Cup football competition at the Stadium East field yesterday.

The result put Charlie Smith level on 12 points with Kingston Technical. The latter school has a far superior goal difference and get the second automatic second qualifying spot from the group while Charlie Smith are expected to advance as one of the best third-place teams.

Charlie Smith coach, Eugene Williams, said the team had pysched up for the game last Saturday only for it to be postponed to yesterday because of a waterlogged pitch. He said it was hard for him to lift the players' spirits again for the rescheduled encounter

"We wanted to place second but the guys were so pumped up for that game (on Saturday), that it was hard to lift them again after it was postponed.

"I tried to motivate them today but we got a flat game, our worse game all season. But we still got the result required," he said.

He was also full of praise for striker Brown, who has scored six of his team's seven goals this season.

"Damar scored both goals. He has six goals this season. He has scored almost all our goals. It seems as if we are depending on him to get all the goals but that is what he is there for. He is our centre forward, he is there to score goals and we hope he takes his good form into the quarter-finals," he said.

He added that no one expected them to progress from the group stage. However, he said they will not get ahead of themselves but take it one game at a time.

"The win was what we wanted and we got the victory, so we are now getting ready for the quarter-finals.

"We have surpassed what everyone expected of us because no one expected us to come out of the group," he said.

Brown opened the scoring in the first half but St George's found an equaliser a minute into the second-half.

However, Brown popped up again later in the half to restore Charlie Smith's advantage and secured full points.

Meanwhile, Mona High will join Kingston College as the two automatic qualifiers from Group C. Mona progressed at the expense of St Catherine High who were beaten 2-1 by Group C winners Kingston College at the Spanish Town Prison Oval.

In the lone Group B game, Wolmer's Boys scored a 2-0 win over Papine High, who finished with no goals and no points.

However, Jose Marti were able to shake off their goalless, pointless tag and end the season on a high after a 1-0 win over Dunoon Technical High at the Spanish Town Prison Oval.