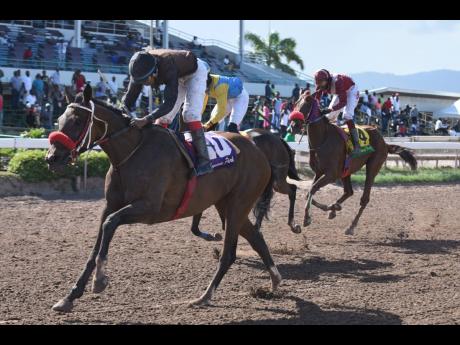 WHATEVER wins the sixth race at Caymanas Park with Anthony Thomas aboard earlier this year.

With jockey's and trainer's championships heading for nail-biting finishes, Solomon Sharpe, chairman of Supreme Ventures Racing and Entertainment limited (SVREL), says a lot more excitement is expected in both sections for the remainder of the racing calendar

Thomas, who last won the title in 2018, has recorded 74 wins compared to Nelson's 70. Omar Walker is currently third in the standings with 40 wins, followed Dick Cardenas and Oshane Nugent, who are both on 26 wins each.

The owner's championship is also too close to call at this point of the season, with Michros leading by $1.2 million over second-placed Carton Watson in the standings.

Sharpe told STAR Sports that with the closeness of both championships will cause the excitement level at track to reach fever pitch over the next few race-days.

"It has been a lot fun, and to see the reaction of the punters from race to race supporting their jockeys with all the excitement is great for the racing industry," said Sharpe. "We are anticipating that excitement will grow over the coming race-days amongst the punters and racing stakeholders at the track.

Meanwhile, the race for the quarterly incentive is also too close at this point. Nelson leads Thomas by three wins in the jockey's section. Nelson has ridden 25 wins this quarter, compared to Thomas' 22.

DaCosta also leads Nunes by three wins in the section for the most races won by a trainer with over 30 horses.

There is a three-way tie between Richard Azan, Michael Marlowe and Ryan Darby for the trainers with the most wins with less than 30 horses. All three trainers have saddled five winners in each quarter.