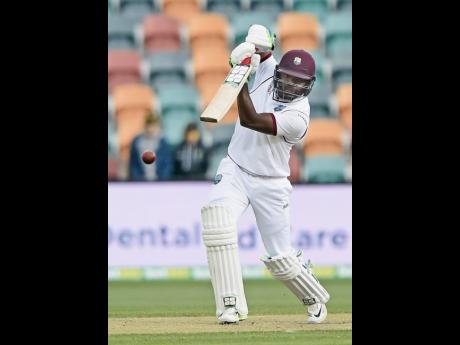 Opener Kraigg Brathwaite gave proof that he may be running into form ahead of the two-Test series against New Zealand, with a masterly hundred to give West Indies a strong start against the Blackcaps' reserves in a tour match yesterday.

Brathwaite batted through the opening day of the four-day, first-class match against New Zealand 'A' at the picturesque John Davies Oval to lead strong Windies batting with a dominant, undefeated 183 that propelled the Caribbean side to 353 for three in their first innings at the close, after they decided to bat.

It was Brathwaite's first hundred in a first-class match since he scored an unbeaten 103 against Leicestershire for Glamorgan in Division 2 of the English County Championship in September last year at Sophia Gardens in Cardiff.

There were few signs of the unimaginative batting that has plagued Brathwaite over the past year and led to questions about his place in the side. He has so far cracked 14 fours and one six from 262 balls in his time at the crease.

He showed the kind of steely resolve for which he had become known from his schooldays and reached his hundred in the final half-hour before tea, when he punched the 139th ball of his innings to deep cover for a deuce off New Zealand 'A' captain Cole McConchie, plying his uncomplicated off spin.

Brathwaite got strong support from the rest of the top order - Darren Bravo, batting at three, continued his rich vein of form with 93, missing on his second hundred of the tour, and fellow left-hander John Campbell eased a few concerns about his durability in the No. 2 opening slot with 45.

Head coach Phil Simmons said before the match that it was important for the West Indies batsmen to spend valuable time at the crease ahead of higher-intensity tussles with the Blackcaps in the two Tests - which count towards the ICC World Test Championships - and his side also needed to win this match for a boost of confidence.

Simmons got the first part of his wish with Bravo and Campbell sharing successive century stands with Brathwaite in a rare show of force from the Windies batting - and the approach of the three batsmen to the task may very well see the second part of the coach's challenge come true in the next few days.

In a volley of strokes, Brathwaite and Campbell carried West Indies to 75 without loss after the first hour and needed only an hour and a half to post the visitors' hundred.

They shared 111 for the first wicket before Campbell was bowled about 15 minutes before lunch, playing down the wrong line to a delivery that moved back from outside the off stump and extracted his middle stump.

Bravo, a century-maker with 135 against the same opponents in a three-day, warm-up match that ended this past Sunday, came to the crease and with Brathwaite carried the Windies to 123 for one at lunch.

The pair continued to plunder the New Zealand 'A' attack after the interval and batted through the afternoon session to take West Indies to 220 for one.

After Brathwaite brought up his hundred, Bravo reached 50 in the last 15 minutes before tea, when he pulled the 90th ball of his knock to deep midwicket off Ben Sears for his sixth boundary, which also brought up the Windies' 200.

After the break, Bravo ushered Brathwaite passed the 150 mark and carried the Caribbean side to 300 before he was caught at backward point off part-time left-arm spinner Rachin Ravindra in the first over after the evening drinks break.

Shamarh Brooks again heeded the advice of the coach and spent half-hour labouring over five before he whipped a delivery from Michael Rae to midwicket.

Jermaine Blackwood joined Brathwaite and batted through almost half-hour to reach 19 not out before stumps were drawn.

The first Test between New Zealand and West Indies starts on Thursday, December 3, at Seddon Park in Hamilton, and the second Test begins on Friday, December 11, at the Basin Reserve in Wellington.