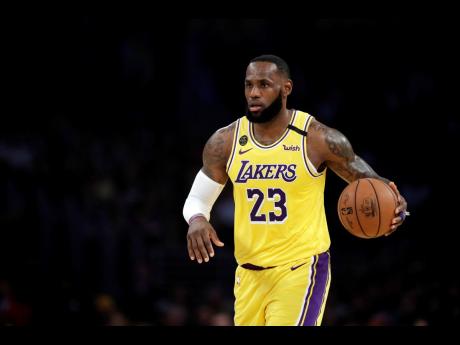 In this March 10, 2020 file photo, Los Angeles Lakers’ LeBron James (23) dribbles during the first half of an NBA basketball game against the Brooklyn Nets in Los Angeles.

LeBron James says his thoughts on social justice can't be contained on the back of a basketball jersey.

The Los Angeles Lakers superstar won't wear one of the NBA-approved social justice messages on the back of his jersey when the NBA resumes competition later this month in the Orlando bubble.

"It was no disrespect to the list that was handed down to all the players," James said Saturday in a conference call from Florida. "I commend anyone that decides to put something on the back of their jersey. It's just something that didn't seriously resonate with my mission, with my goal."

As part of the NBA's recognition of the nationwide invigoration of the social justice movement sparked by the death of George Floyd, NBA players are allowed to choose from a lengthy list of possible messages for their jerseys during the league's restart. James is among just a few who declined to choose one of the messages, he said.

"I would have loved to have a say-so on what would have went on the back of my jersey," James said. "I had a couple of things in mind, but I wasn't part of that process, which is OK. ... Everything that I do has a purpose, has a meaning. I don't need to have something on the back of my jersey for people to understand my mission or know what I'm about and what I'm here to do."

The 35-year-old superstar has a long history of social involvement and advocacy for progressive causes. James speaks frequently of what he feels is a responsibility to campaign for positive social change from his powerful position in sports and pop culture.