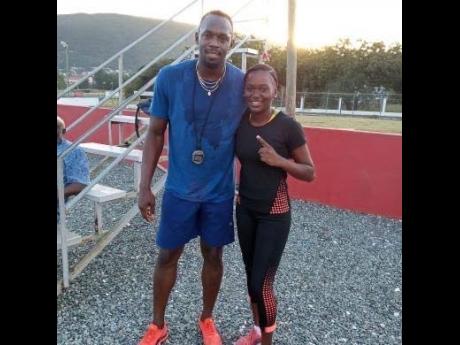 Usain Bolt and Kasonia Smith at the Usain Bolt Track at the UWI Mona Bowl. 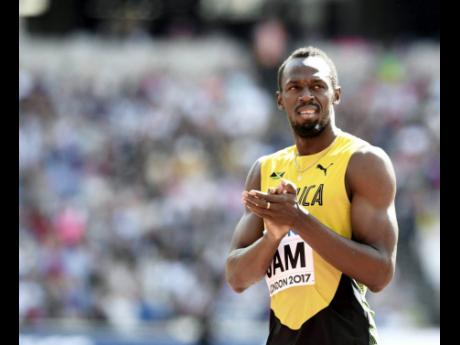 Young hurdler Kasonia Smith says sprint legend Usain Bolt left her beaming after words of encouragement recently, and says she will be forever marked by this moment.

Smith's encounter with the world's fastest man happened during training at the Usain Bolt Track at the UWI Mona Bowl recently.

Although Bolt never was a hurdler, he gave the former Edwin Allen student some advice about her attitude.

"Being more aggressive is the main thing he told me," the 20-year-old told STAR Sports. "Don't be too casual over the hurdles, and always get thirsty! You want success? Get thirsty."

"I would love to see the self-confidence that Kasonia has off the track being exhibited on the track," he said. "She is an immensely talented young miss. She just needs to believe some more in herself."

"Honestly, I never expected that to happen. It was a lot of excitement. Meeting him was breathtaking. I was shocked the first time I saw him."

Coleman says the meeting will have a positive impact on her career.

"I think such a meeting carries an indelible impact for motivational force," he said. "Here is a young miss meeting an icon. Someone whose name was interchangeable with the sport track and field. And he's not just Usain Bolt the icon, but he's Usain Bolt the icon, a Jamaican. So it is definitely a long-lasting impression for her."

Smith's personal best in the 100m hurdles is 13.02 seconds. If the season hadn't prematurely ended because of the COVID-19 pandemic, she would have aimed at running 12.82 seconds.

Japanese tennis star Naomi Osaka may be envious of Smith, as she said on Sunday that she has a dream of meeting Bolt.

"Usain Bolt is my all-time favourite athlete. I hope I can meet him one day," Osaka tweeted.

Bolt retweeted with the comment, "We will me make it happen. Keep breaking those records."