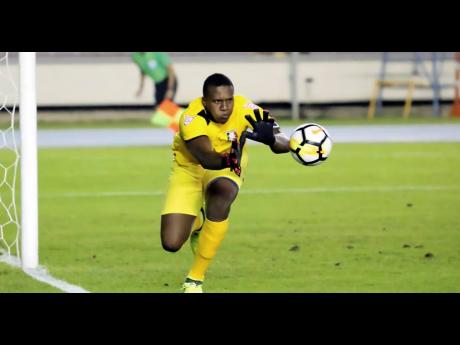 Arnett Gardens head coach Alex Thomas may have a difficult choice as to who will be the starting goalkeeper for their Red Stripe Premier League (RSPL) game against Harbour View on Sunday. Despite the return of captain Damion Hyatt to the Arnett starting line-up in Wednesday's 1-1 draw with Waterhouse, Thomas says that the starting position is up for grabs and that the competition is good for the team to keep them hungry for places.

"What we have at Arnett Gardens is to keep everybody competitive and everybody has to fight for a spot week in, week out," he told Star Sports. "No place is guaranteed for no one and that's the competition there with all three goalkeepers, Hyatt, [Chadeem] Rodrigues and Tajay Griffiths. And they have been pushing themselves to the limit for whoever wants to start week in, week out."

Hyatt made his long awaited return to the field after sidelined for two months suffering a neck injury against Waterhouse on October 13. The 19-year-old Chadeem Rodrigues made his first start of the season in the following game against defending champions Portmore United, recorded his first clean sheet in the 1-0 win. He has gone on to post two more shutouts in the games he has played.

Thomas praised Rodrigues for his performances in Hyatt's absence but was glad to recall the skipper into the fold on Wednesday when Rodrigues was unavailable for selection due to him sitting exams that day. He said that the timetable for Hyatt's return was right on schedule.

"It's good to see the skipper return against the same opponent. [His recovery] was right on track but [Rodrigues] filled the gap in his absence and did well. It's a pleasure to have him back after a lengthy time out and it builds confidence for the team," he said.

After an up and down first round for Arnett Gardens, the "Junglists have now managed four wins in their last seven games and are now four matches unbeaten. They are currently in third place with 27 points, one behind second-place Mount Pleasant. Thomas credits the improved form in the second round to his squad having the right mindset able to take lessons from every game they play.

" We have the right attitude towards everything on and off the field of play. They act like professionals. They are quick to accept the bad and the good and move forward and build on. So everything relies on them. They are the ones doing it.," he said.

Arnett Gardens travel to Compound to face Harbour View on Sunday who they have not lost to in three meetings this calendar year.