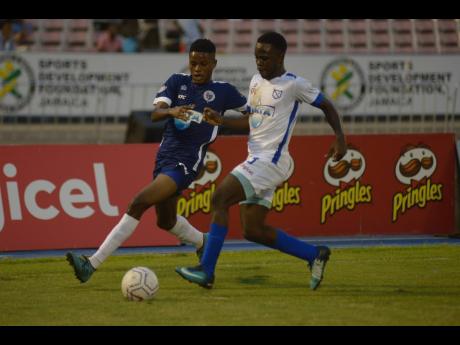 After a historic run in this season's ISSA/WATA daCosta Cup, coach of McGrath High School, Jermaine Thomas had showers of praise for his team.

The school from rural St Catherine not only made it out of the first round for the first time, but made it to the last four in the competition. They missed out on going all the way after suffering a second-half 3-0 defeat to defending champions Clarendon College last Wednesday.

They also got a sort of bittersweet taste of the all-island knockout ISSA Champions Cup.

McGrath had a stellar start to the season topping preliminary group K ahead of Charlemont and Dinthill. In the second round, they knocked out 11-time champions Rusea's to get the quarter-final group. Their biggest success came when they topped their quarter final group turning back St Elizabeth Technical High School to get into the semi-finals.

"We played well and I must commend the boys. First time out of the first round and to go on such a run to the semi-finals of the daCosta Cup. We showed that we have class, we showed that we can play. The Clarendon College team that beat us would have racked up some 20-plus goals in their last five games before us," Thomas said.

"For me, it's big up, commendations, applauds, praising them. After the semi-final loss I didn't even think about pointing fingers or rough anybody. I think, they deserve all the accolades they can get at this time."

Thomas, who is hoping this season's success will bring more support to the programme, is optimistic and looking forward to what next season will bring.

"We should be losing about five players so some 90 per cent of our team will be there and we have some other youngsters coming in. For us, it's just to garner more resources and support and we can do this again or even better," Thomas said.