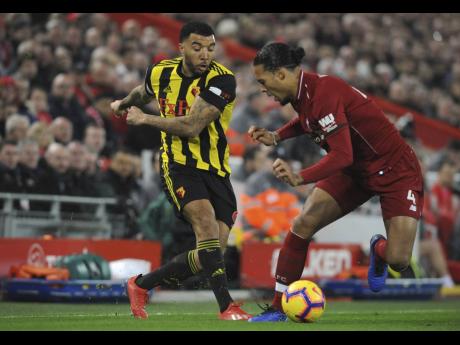 Watford FC captain Troy Deeney has been a target for the Jamaica Football Federation (JFF) to add to the Reggae Boyz squad but the striker has not been keen on a call-up. In a recent Poet and Vuj podcast, Deeney said the reason for his refusal was simply because he feels no connection to the island.

"Genuinely, why I turned down Jamaica is because I've never been there," the English Premier League striker said when asked about his origins.

Deeney joins the list of several overseas players with the option of playing for the Reggae Boyz having been born in Birmingham, England, with Jamaican descent. Yet despite acknowledging his cultural heritage, he admitted he feels it would be wrong for him to represent Jamaica.

A major reason for this decision was the fact that visiting the island has not been one of my interests.

"I've got family that live there but it has never interested me," Deeney said. "Why would I go over there to play football and represent a country that I've never been to. My nan and that live there, and my uncles go there all the time, but me personally, I have no interest to go there."

Cardiff City's Bobby Reid and Deeney's Watford teammate Adrian Mariappa have both accepted JFF's offer, but Deeney has remained steadfast in his choice despite being approached on two different occasions.

He said, however, that he has thought about representing Jamaica but feels if he does so, it would be without any financial gain.

"I have thought about doing it but feel like if I did do it, I would put back every bit of money that I've got from it and put it back into Jamaica," Deeney said on the issue. "I wouldn't actually take any money because that'll be stealing from the land, essentially."

Deeney has stated his desire to represent England and has been holding out for an England call-up but to this date, is yet to receive an international cap. He had previously hinted at eligibility to play for Northern Ireland in the past, but missed out on the opportunity as it was his great-grandfather - and not is grandfather - who was Irish, making Deeney ineligible.