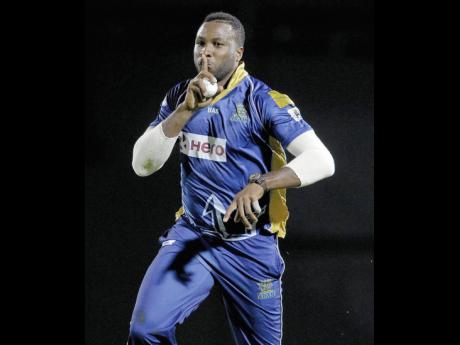 Captain Kieron Pollard believes Trinbago Knight Riders' (TKR)crucial win in last Sunday's play-off match could be the turning point for his side as they head into tomorrow's massive semi-final against arch-rivals Barbados Tridents.

The two-time reigning champions entered the contest against St Kitts and Nevis Patriots on the back of four straight defeats and without a victory in six matches, but managed to break the losing streak by chasing down 126 to win by six wickets at the Guyana National Stadium.

"I'm hoping this can be the turnaround. We have a couple days [rest], we go back in front of our home crowd and that will spur us on even more," said Pollard, looking ahead to the encounter at the Brian Lara Stadium.

TKR will be bidding for a place in Saturday's final against Guyana Amazon Warriors, who played unbeaten in the league phase to win all 10 matches and top the standings.

However, TKR will have to break this season's jinx against Tridents, to whom they suffered defeats in both their clashes this season.

Pollard, who assumed the captaincy this campaign from injured all-rounder Dwayne Bravo, said it was important to find the right balance for the critical match.

"Winning the toss where the wickets looked a bit tacky, our spinners bowled magnificently well [against Tridents]," Pollard explained.

"Going to Trinidad might be different but we're gonna come up with the best combination to win. That's all we've been trying to do. We've been trying things. It's better to try and fail than fail to try.

"We got a lot of licks for it but we continue to take it because our backs are broad and we crack on."

Pollard said TKR's batting needed to pull their weight, however, as evidenced by their struggles chasing Patriots' meagre 125 for seven.

TKR found themselves in trouble at 31 for three in the sixth over before recovering through opener Lendl Simmons' 51 and an unbroken fifth-wicket stand of 50 between Denesh Ramdin (32 not out) and Pollard (26 not out).