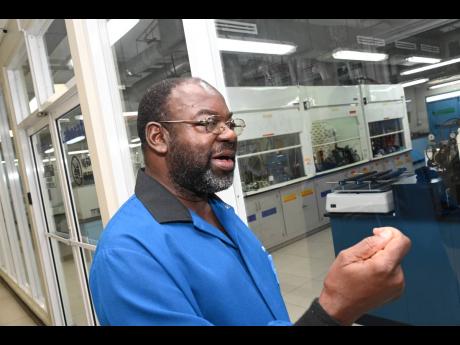 Linton Coke said that despite the emergence of electric cars, his services will always be necessary. 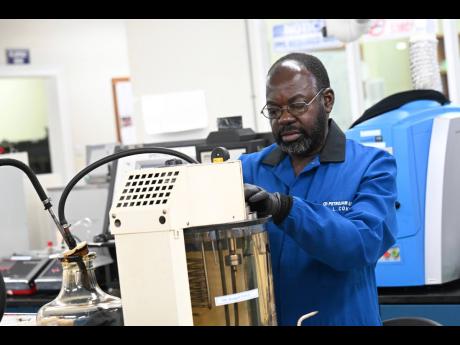 Coke at work inside the lab at Petrojam, where he has worked for 40 years.
1
2

The availability of safe and reliable petroleum is vital to a productive society, and Linton Coke, a laboratory technician at the island's refinery, Petrojam Limited, is crucial to this process.

Coke is one of 20 technicians who analyses fuel samples daily, and has developed a deep affinity for the profession, one that he has been enjoying for the past 40 years.

"I love it! The job is fulfilling, knowing that you are doing something that impacts the entire society because without energy, we can't move and this is what we provide," Coke said.

The seasoned technician is tasked with providing quality assurance that meets international standards for fuels such as gasolene, kerosene, diesel, black oil, cooking oil and asphalt. He is, however, not limited to only fuel tests as Coke has other duties including environmental and waste water checks.

Coke wasted no time in showcasing his skills, demonstrating a viscosity test (viscosity is a measure of a liquid's resistance to flow). Donned in his dark blue fire retardant lab coat and hard boot, he entered the laboratory, then grabbed a fresh pair of black gloves. He then went to the station where the viscometer was placed, and without delay started prepping the machine by cleaning it. Carefully, with much precision, he squirted gasolene into the machine. Coke stared at the chemical as it moved in the machines.

It took him back to his first day on the job in 1982, when he walked through the gates of Esso, Petrojam's former name.

"It was the smell of lube oil [lubricant], I can't even explain it, it has a high smell. I couldn't forget it but I grew into it and it grabbed me from then," Coke told the news team.

Being a lab technician, according to the Cockburn Gardens, St Andrew, native, it is an acquired skill as most of the knowledge is attained while working in the field. He stressed that it demands a strong grasp of mathematical calculations and a good scientific background as the work comprises the use of chemicals components.

Coke first worked at the government chemist building in 1979, a dream he held on to since he was 10. After completing secondary education at Kingston College and not being admitted to the electrical engineering programme at the then named College of Arts, Science and Technology (now University of Technology, Jamaica), Coke was drawn to the job by his pastor.

As the government chemist, he was tasked with testing and providing certification for products being placed in the market. His job was to test milk, rum and bauxite for two years.

While he enjoyed his day job, he spent hours in the evenings getting certified as a lab technician.

"It was very tedious, but I love it," Coke said, flashing a smile.

And while the world prepares for a surge in electric cars, Coke told THE STAR that his job will still maintain its relevance.

"People believe that once they have electric cars, you won't need fuel. That is not true. A lab tech's job will always be in demand. We still have to do the testing for the fuel that will produce the energy in the car, whether it is the battery. All you would do is move from one type of testing to another; we will just continue to evolve," he maintained.

His greatest wish is to witness the discovery of oil in Jamaica as well as the modernisation of the oil plan. He said this will assist in saving revenue.