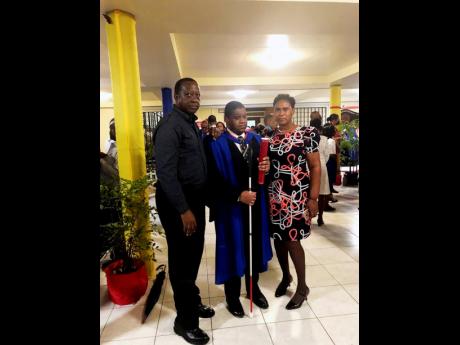 Kareem Vassell (centre) with his parents Neville and Vivenne. 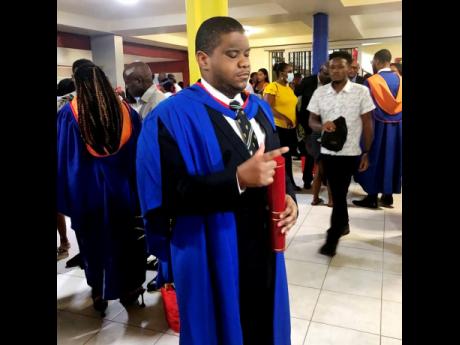 When the COVID-19 pandemic forced The University of the West Indies to suspend face-to-face classes in 2020, Kareem Vassell had to quickly put in place measures to ensure he could continue his education.

Prior to the onset of the pandemic, Vassell, like other blind and visually impaired students, got assistance from volunteers who read for them or acted as scribes during exams on campus. Their realities changed when COVID hit. Vassell, for example, had to return home and depend on his parents, Vivenne and Neville Vassell, to read for him as he attended university online.

The 25-year-old, who on Friday graduated from the highly acclaimed university with a Bachelor of Science degree in economics and banking and finance, said a strong support system, which included his parents, helped him navigate the trickiest periods of his life.

"It is not like they were telling me answers or anything, they just had to know the movement of the graphs. In terms of the [mathematics] symbols, they just had to tell me what they mean. I would still have to know how to do the calculations for certain things, they would just read the question and tell me what the options are. They were literally the home-version of the scribes that I had at school, and that's how we set it up to maintain the integrity," the new graduate said.

Vassell was born premature at six months and two weeks, and lost his sight shortly after birth. He said that his parents, recognising his disability, ensured that he got a strong education.

He said they stayed up with him late at nights, reading for him as he prepared for exams.

The elder Vassell said he and his wife made sure to give their only child the best assistance as he went about studying concepts and theories they knew nothing about.

"We would tell him that this symbol is shaped like a pencil stacked on top of the other one, and he would know. Let me tell you, Kareem is such a gifted child. He worked hard for this degree," the proud father told THE STAR.

The father, who did not complete high school, said his son's success is monumental for the family.

"This degree is for all three of us. Me, him and him mother," Neville said.

With his bachelor's degree under his belt, the Jamaica College old boy has his sights set on making an impact in the financial sector, where he hopes to secure employment.

"I am happy when I took the first step to collect my degree, but the most important thing right now is finding a job," said the St Andrew native, even as he expressed the hope that his story will motivate more persons with disabilities to go into uncharted waters.