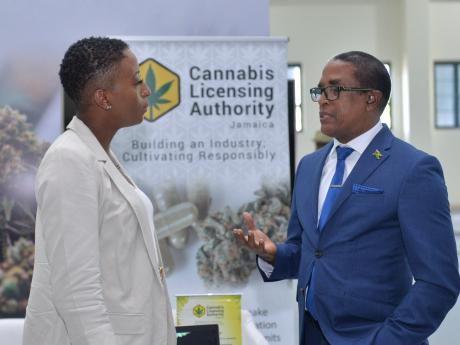 Minister of State in the Ministry of Industry, Investment and Commerce, Dr Norman Dunn, in discussion with Interim Chief Executive Officer, Cannabis Licensing Authority (CLA)t, Daenia Ashpole, during the CanEX Jamaica Conference and Business Expo at the Montego Bay Convention Centre in St. James, on September 16.

Minister of State in the Ministry of Industry, Investment and Commerce, Dr Norman Dunn, says with medical cannabis gaining significant international traction, Jamaica remains on the cusp of being a major legal transhipment hub.

Speaking at the fifth CanEX Jamaica Business Conference and Expo, at the Montego Bay Convention Centre in St. James on September 16, Dr. Dunn said there is every reason to believe that Jamaica will become a huge part of this “lucrative” market, adding that “the best is yet to come.”

“One significant industry development this year was that, in February, we facilitated… the first legal transhipment of cannabis through Jamaica,” he noted.

“What this has done is to set the stage for Jamaica to become the hub of legal transhipment of cannabis for medical purposes. The quality of Jamaica’s indigenous strains, coupled with considerable local knowledge and Jamaica’s climatic conditions, makes this all a winning combination,” the State Minister added.

Dr Dunn said it is not by coincidence that the island is known for “a lot of firsts” as it relates to agricultural products, citing, as examples, coffee, cocoa, and ginger being “number one in the world.”

“Obviously, there’s something about Jamaica that’s creating all these number ones. These are premium products across the world, not in the Caribbean or in North America… but in the world,” he argued.

Dr Dunn said Jamaica, with its soil type and climatic conditions, has found a “sweet spot” which, if nurtured and handled properly, is bound to attract investors and new stakeholders - both local and foreign.

He noted that Grand View market research revealed that the global legal cannabis market was valued US$17.8 billion in 2021 and is expected to expand at a compound annual growth rate of 25 per cent from 2020 to 2030.

“The high demand is fuelled by an increase in the number of countries which have legalised or decriminalised cannabis, and its increasing acceptance for medical purposes,” he added.

Dr Dunn said the Government is aware of this economic reality and the potential of cannabis and will be approaching the establishment of a viable industry with intelligence, creativity, and responsiveness to the market.

The State Minister said he is cognisant that persons have been wondering why the Government is not moving faster to capitalise on the opportunities which the cannabis sector represents but cautioned against undue haste.

“We are part of several treaties and obligations that we must follow because Jamaica must be known as a rule-based country. We’re a country that believes in the establishment of rules, and by participating in that, you can succeed. So we don’t need to move outside of that in any haste, because we must develop an industry that is viable, sustainable, and for the long term,” he emphasised.