Hurricane Fiona moving away from Turks and Caicos Islands 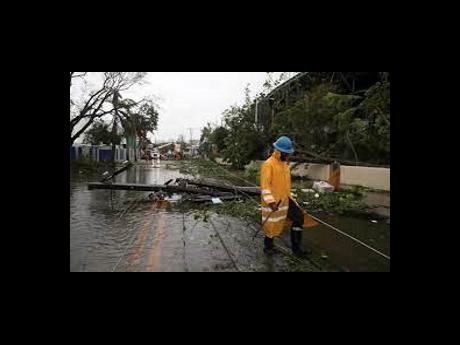 Hurricane Fiona moving away from Turks and Caicos Islands

Acting Governor and Director of the National Emergency Operations Centre, (NEOC), Anya Williams, said while there had been no casualties as a result of the passage of the hurricane, the TCI is rainfall of between four to eight inches.

“There are currently 165 persons in shelters across the Turks and Caicos Islands. Island wide power outages are currently being experienced on the islands of Grand Turk, South Caicos, Middle Caicos, while 30 per cent of Providenciales ,..are currently without power.”

She said utility providers have informed that they will be addressing these issues “as soon as it is safe to do so.

“Please be assured as well that as soon as it is safe for our team to be deployed, we will go out into the communities to assess and support those who have been severely affected by the storm,” the Acting Governor added.

The NHC said that a hurricane warning remains in effect for the TCI while a tropical storm warning has gone into effect for southeastern Bahamas, including the Acklins, Crooked Island, Long Cay, the Inaguas, Mayaguana, and the Ragged Islands

It said interests in Bermuda should monitor the progress of Fiona, which was located near latitude 22.0 North, longitude 71.4 West.

“Fiona is moving toward the north-northwest near nine mph.  This general motion is expected to continue through today, followed by a turn toward the north tonight or Wednesday.  On the forecast track, the center of Fiona will continue to move near the eastern Turks and Caicos during the next few hours, away from those islands by tomorrow, and approach Bermuda late on Thursday.”

The NHC said that maximum sustained winds remain near 115 mph with higher gusts and that Fiona will be strengthening during the next couple of days.

Tropical storm conditions are expected over portions of the southeastern Bahamas for the next several hours and Fiona is forecast to produce rainfall totalling four to eight inches over the TCI and one to four inches in the southeast Bahamas:

“The combination of storm surge and the tide will cause normally dry areas near the coast to be flooded by rising waters moving inland from the shoreline. Storm surge could raise water levels by as much as five to eight feet above normal tide levels along the immediate coast in areas of onshore winds in the Turks and Caicos through today,” the NHC warned.

It said swells generated by Fiona are affecting the Virgin Islands, Puerto Rico, the northern coast of Hispaniola, the Turks and Caicos Islands, and the southeastern Bahamas.

“These swells will continue to spread westward across the southwestern Atlantic toward the central and northwestern Bahamas and the east coast of the United States through midweek.  Swells from Fiona are expected to spread across Bermuda later this week.”