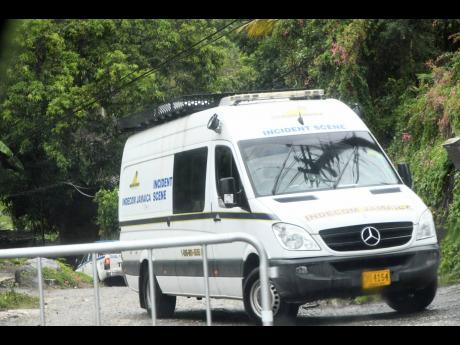 A man who is believed to be of an unsound mind was yesterday morning shot dead during a confrontation with two police officers along Waltham Park Road in St Andrew.

The identity of the deceased was not established up to press time. The incident reportedly took place around 2 a.m. According to Senior Superintendent Kirk Ricketts, commanding officer for the St Andrew South Police Division, the man was physically assaulting a woman and was threatening to stab her with a knife when the lawmen intervened.

"What I understand is that the police officers were responding to a call for service from police control and in dealing with that they were about to move off when they saw a woman running up to them shouting for help. From all indications she was being attacked by this individual and the police intervened and gave him the relevant commands. But he continued his attack to include the police this time. The police placed themselves between him and the woman and as such he was shot," Ricketts said.

Ricketts also disclosed that the officers were injured during the attack and that they were taken off frontline duty to facilitate an investigation that is being conducted by the Independent Commission of Investigations (INDECOM). He said their injuries are minor. In a release sent to the media yesterday, INDECOM said it was appealing to the public to assist in identifying the deceased who is of dark complexion, has plaited hair and a birth mark on his left thigh.

"The concerned officers provided initial accounts of the incident to the investigative team and were each served a Section 21 Notice to provide a statement and attend the office of the commission to be interviewed. The incident scene was processed by INDECOM and included the collection of forensic exhibits, namely the recovered weapon, a knife, and the service firearms of the concerned officers," the release said.

In July a man was shot dead by a police officer following a confrontation in the transportation centre in Half-Way Tree, St Andrew. That man, who was also believed to be mentally ill, allegedly attacked persons earlier in the bus park with stones and other sharp objects.