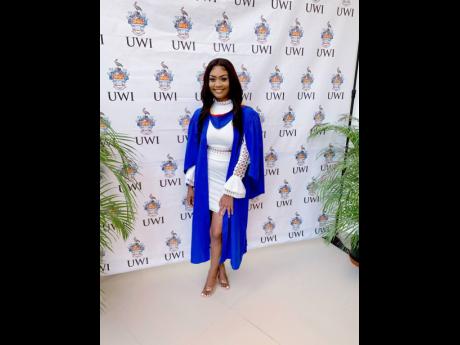 Despite suffering third-degree burns and other ailments from a car accident, feeling the pain of a loved one's death or the stress of financial struggles, Gabrielle Stewart, 23, was determined to finish her degree.

When Stewart started the University of the West Indies (UWI), Mona, in 2017, she was unsure how to fully pay for tuition.

"My mother never wanted me to take no student loan but she couldn't manage. She tried to pay for my first year but when me just a start UWI she did lose ar work. She was the only one in the household that had a steady job," she said.

By second year, Stewart said her mother was severely struggling to pay the fees and by third year, Stewart had to take on the financial burden. Stewart said it was the support of her sister Brittany, who graduated from the UWI two years prior, that saved her financially. However, in January 2020, her beloved grandmother passed away after battling cancer.

"I was very close to her. I grew up with her. I lived with her up until she died because she died at home," said Stewart. Then in February of this year, the second semester of her final year, Stewart was in a car accident that led to severe back pains that she said kept her awake most nights. She also had third degree burns that covered her hands. Stewart, who had a job as a receptionist, admitted that sometimes she cried while at work.

"School was stressing me out in addition too ... mi just a go through everything all at once. Mi never know seh me have high blood pressure til this year. Everything dida come down pon me and me did just feel depressed," she said. Stewart said that she failed some courses multiple times and coupled with the health issues, she was ready to quit.

"Mi feel like a failure, me feel defeated. Mi nah sleep. One a di time mi guh down to bout 100 pounds. I'm 5'6", enuh and I was 100 pounds. Mi mawga dung to how me stress right out," she said. But Stewart said she was blessed with good support from family, friends and co-workers.

"So every time mi feel like mi back inah one corner, my friends were there to say 'girl, a chu you deeven know how me and boyfriend deh yah a pray fi yuh'. Mi sister really help me, especially with the money part of it. Mi co-workers, wherever they could they help me, down to the cleaning lady (also helped)," she said. "When time mi start bawl cause them tell me them nah guh make me do mi exam cause me nah nuh money fi pay fi it, and she seh 'girl, mi nuh have it neither but see $5,000 yah' and mi put on that. Mi just get a whole heap a help and honestly me just feel like because me a get so much help, mi affi try fi push fi make sure seh dem people yah proud a me at the end of the day."

Stewart said she is encouraging other university students who might be going through similar circumstances to ensure they have people to talk to.

"It nuh affi be somebody weh can help you financially. Just talk to somebody and get it offa yuh chest so your mind can clear and you can focus on your studies," she said. Stewart, who now holds a bachelor's of science degree in information technology with honours and has a small online business with her sister where they sell earrings and headbands.