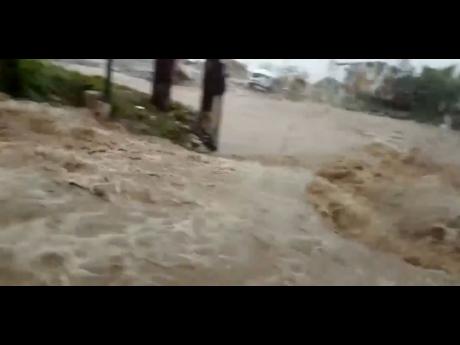 This screenshot from a viral video on social media, shows the flooded main road in Shooters Hill, St Andrew.

The National Works Agency (NWA) is warning motorists that driving conditions along several roadways may become an issue, as the country continues to experience persistent rainfall.

According to NWA Communication and Customer Services Manager, Stephen Shaw, there have been reports of flooding, landslides, fallen trees and rock falls along roadways in St. Andrew and St. Thomas.

Mr Shaw says it can be expected that these incidences will increase, as the island continues to be affected by the inclement weather.

The Agency is currently involved in a joint operation with the Jamaica Fire Brigade in responding to a situation in Shooters Hill, St. Andrew where an embankment has fallen onto a dwelling house.

The Bull Bay main road, also in St. Andrew, has been rendered impassable at a few points due to flooding, more notably in the 7 Miles and 10 Miles areas.

The NWA says motorists should try to avoid using the corridor at this time.

Landslides and fallen trees are now affecting movement along the roadway to Hagley’s Gap, Mahogany Vale and Penlyne Castle in St. Thomas.

It is also not safe at this time for motorists to attempt accessing Trinityville using the temporary detour at Font Hill Crossing as the area is severely flooded.

The state of the roadways in Windsor Forest, Louden Hill and Cane River, St. Andrew are being monitored as there have been reports of falling rock, flooding and landslides in the areas.

The NWA has urged motorists to remain vigilant whilst using the nation’s roadways at this time, even where there are no evident signs of severe flooding or landslides, as driving conditions may deteriorate rapidly due to the continued rainfall.