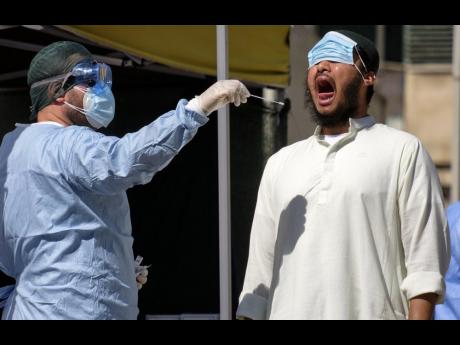 A member of the Bangladeshi immigrant community, right, has a swab being taken to test for COVID-19 outside a healthcare center in Rome, Thursday, July 9, 2020. Italy, the onetime European epicenter of the outbreak, went on alert about possible infections in the Bangladeshi immigrant community after a cluster of about a dozen cases was traced to a recently returning Bangladeshi worker in Rome. (Mauro Scrobogna/LaPresse via AP)

(AP) — Asian and European officials pleaded with their citizens Thursday to respect modest precautions as several countries saw coronavirus outbreaks accelerate or sought to prevent new flare-ups, while the virus showed no signs of slowing its initial advance in Africa and the Americas.

Following two nights of anti-lockdown protests in Serbia, authorities banned mass gatherings in the capital of Belgrade amid an uptick in confirmed COVID-19 cases.

Officials elsewhere in Europe warned of the risk of new flareups due to lax social distancing, while officials in Tokyo and Hong Kong reviewed nightclubs, restaurants and other public gathering spots as a source of their latest cases.

Infections mounted at a frightening speed in the countries with the world’s highest confirmed caseloads the United States, India and Brazil.

Between them, the three account for the majority of new cases worldwide reported daily.

In the U.S., the total number of confirmed cases has passed 3 million, meaning nearly one in every 100 people has been confirmed as infected

The head of the Africa Centers for Disease Control and Prevention said the continent would be wise to prepare for the worst-case scenario as virus-related deaths passed 12,000 and confirmed cases climbed fast.

A day after confirmed virus cases across Africa surpassed half a million, the total was over 522,000, and the actual number of cases is unknown since testing levels are low.

Flare-ups of new virus cases are causing concern in several parts of the world, and in some cases leading to the reintroduction of restrictions on public activity.