WHO warns that 1st wave of pandemic not over, dampens hopes 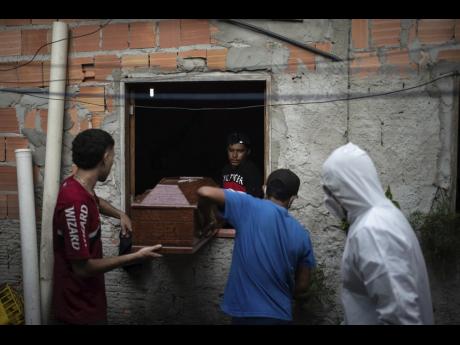 Relatives help a SOS Funeral worker, wearing protection equipment amid the new coronavirus outbreak, remove the body of Eldon Cascais from his home in Manaus, Brazil, Saturday, May 9, 2020. According to Cascais' relatives, he had lung cancer and died at home after suffering from shortness of breath, cough and fatigue for a week. (AP Photo/Felipe Dana)

BANGKOK (AP) — As Brazil and India struggle with surging coronavirus cases, a top health expert is warning that the world is still in the very middle of the outbreak, dampening hopes for a speedy global economic rebound and renewed international travel.

“We’re still very much in a phase where the disease is actually on the way up,” Ryan said, pointing to South America, South Asia and other parts of the world.

India, with a population of over 1.3 billion, saw a record single-day jump in new cases for the seventh straight day.

The virus has taken hold in some of the country’s poorest, most densely populated areas, underscoring the challenges authorities face in trying to contain a virus for which no vaccine or cure has yet to be developed.

Most of India’s cases are concentrated in the western states of Maharashtra, home to the financial hub of Mumbai, and Gujarat.

Infections have also climbed in the east as migrant workers stranded by lockdowns returned to their native villages from India’s largest cities.