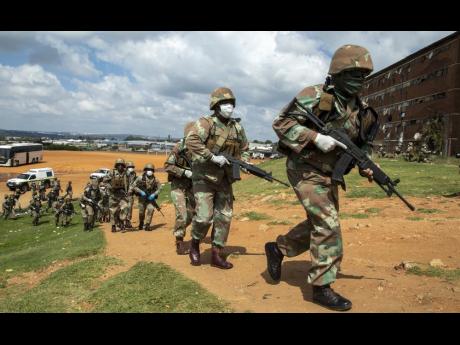 South African National Defence Forces take up positions outside the hostel in a densely populated Alexandra township east of Johannesburg, South Africa, Saturday, March 28, 2020. South Africa went into a nationwide lockdown for 21 days in an effort to control the spread of the COVID-19 coronavirus. The new coronavirus causes mild or moderate symptoms for most people, but for some, especially older adults and people with existing health problems, it can cause more severe illness or death. (AP Photo/Themba Hadebe)

Virus prevention measures have taken a violent turn in parts of Africa as countries impose lockdowns and curfews or seal off major cities. Health experts say the virus’ spread, though still at an early stage, resembles the arc seen in Europe, adding to widespread anxiety. Cases across Africa were set to climb above 4,000 late Saturday.

Abuses of the new measures by authorities are an immediate concern.

Minutes after South Africa’s three-week lockdown began Friday, police screamed at homeless people in downtown Johannesburg and went after some with batons. Some citizens reported the police use of rubber bullets. Fifty-five people across the country were arrested. The country leads Africa with more than 1,000 cases.

And Zimbabwe, where police are widely criticised by human rights groups for deadly crackdowns, is set to enter a three-week lockdown on Monday. The country’s handful of virus cases already threatens to overwhelm one of the world’s most fragile health systems.

In Kenya, outrage over the actions of police was swift.

“We were horrified by excessive use of police force” ahead of the curfew that began Friday night, Amnesty International Kenya and 19 other human rights groups said in a statement issued Saturday. “We continue to receive testimonies from victims, eyewitnesses and video footage showing police gleefully assaulting members of the public in other parts of the country.”

The Law Society of Kenya will go to court to challenge the curfew on the grounds that it is unconstitutional and has been abused by police, president Nelson Havi said in a statement. The penalty for breaking a curfew is not corporal punishment, he added.

“It is evident that COVID-19 will be spread more by actions of police than of those claimed to have contravened the curfew,” Havi said.