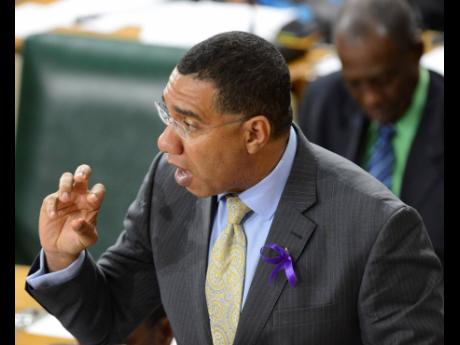 Prime Minister Andrew Holness, who had promised Jamaicans that once he was elected, they would be able to sleep with their windows and doors open, says his Government remains resolute in dealing with the crime problem including murders.

The prime minister, who is in Japan, issued a statement to the media on Thursday, following the killing of four persons in Kitson Town, St Catherine, and a young politician in Seaview Gardens, St Andrew.

“Crime impacts all of us, and even in the Kitson Town case, our Minister of Culture, Olivia Grange, lost members of her family. We grieve with her and all Jamaicans who have lost loved ones. The Government will continue to build out the intelligence and investigative capabilities. We are seeing progress in many areas, but we cannot relent,” said Holness.

The prime minister said that recent convictions demonstrate that there is an improvement in the work of the police.

“We now have cases before the Court against dozens of gangs, an unprecedented development. We just saw the conviction of one of the most notorious gangsters in Spanish Town and one of his cronies is before the Courts,” said the prime minister.

Meanwhile, the Private Sector Organisation of Jamaica, the Jamaica Manufacturers and Exporters Association and the Jamaica Chamber of Commerce are strongly encouraging the leadership of the political parties to urge their spokespersons to channel their efforts towards expediting the much-needed national consensus on crime.

“Like all Jamaicans we continue to be concerned that, despite efforts, crime remains at crisis levels,” the groups said.

The private sector groups said they have noted the heightened level of political rhetoric building about the state of crime in the country. They said that the discourse has seemingly moved away from collaborative to once again combative on the matter.

“We call on both leaders to keep their teams focused on taking a joint and collaborative position on fighting crime as their primary objective, and, while we continue to support the team working on finalising the consensus views, we similarly urge them to expedite conclusion of this united view on the steps that need to be taken to reduce this growing scourge of violence and crime that grips our nation,” they said.