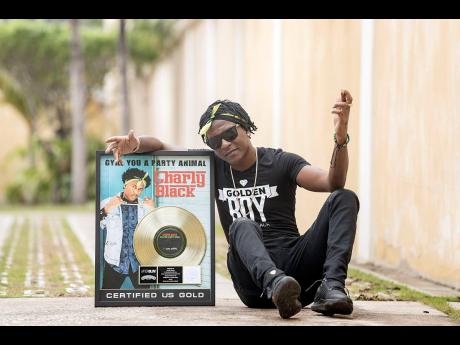 Team Unstoppable producer, Crawba Genius, has scoffed at the suggestion that the Billboard-charting dancehall artiste Charly Black has been 'buying views'.

He told THE STAR that since the entertainer's latest single Siddung racked up 14 million views on YouTube, there have been claims that he somehow cheated his way to those numbers.

"Charly Black is not a mediocre artiste like weh unu think. Is like people nuh memba say this is a man weh has record that is certified gold in the US. He has been on the Billboard and has platinum and diamond plaques. His fan base is huge and so we nuh need to buy views," he said. "Fourteen million views is nothing to reach when your fan base is the world. Some places weh Charly have sold-out shows, some artiste a Jamaica never even heard of them and me can tell yuh because mi deh pan the road wid him."

Crawba Genius pointed out that the artiste's single Gyal You A Party Animal hit the Latin market before Jamaicans started noticing it.

"Memba Jamaica is not really Charly Black strong base innu. A out in a the world the don go seal him thing and den people a Jamaica say 'eeh eeh, a so him a gwaan'? But Charly big in a the world. Dem man deh sel lout shows a Israel and dem place deh," he said.

The producer also suggested that Siddung is racking up views because female fans gravitate to it.

"The song is all about females and from that's the topic, it a go get attention. Females make up a large portion of Charly's fan base so when dem catch on to something, it a go run weh," he said. "Most a di people dem yuh hear a talk, a nuh fans, and dem uncomfortable say a man like Charly, weh nuh so popular a Jamaica, a get dem views yah." Crawba Genius also said that Charly Black is completely unbothered by the rumours.

"More while a me affi a tell him wah gwaan cuz him nah pay attention like that. People come to Charly already and a show him how fi get how much followers pan Instagram and di man not even look. Him just nuh inna certain things," he said. "Dem man deh believe inna 'yuh work will speak for itself', so him nuh pay the chattings too much mind."

Checks made by THE STAR show that Charly Black's YouTube numbers have been consistently high. Gyal You A Party Animal has racked up more than 177 million views.